What Is Obsessive-Compulsive Disorder (OCD)? 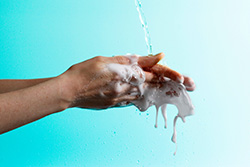 For example, a person with OCD may obsess about becoming contaminated with dirt or germs and wash their hands excessively in response. Or they may worry that the house will burn down so they feel compelled to check the stove 30 times to be sure it’s off before they leave the house.

Obsessions or compulsions are time-consuming or cause significant distress or impairment in functioning.

How Common Is OCD?

OCD is common yet often under-recognized. In any one-year period, it affects about 1% to 2% of the population.

Anyone can get OCD. This condition occurs around the world. It affects both males and females and people of all ages, races, and ethnicities. OCD often starts during late adolescence.

How Serious Is OCD?

OCD varies in severity and can be quite severe. It can cause substantial suffering and often makes daily activities difficult. However, effective treatments are available.

What Treatments Work for OCD?

Medications and CBT are effective for a majority of people with OCD. These treatments usually improve OCD obsessions and compulsive behaviors, and they also often help people feel less depressed and anxious. Some people improve when they're treated with an SRI alone or with CBT alone, whereas others benefit from receiving both treatments at the same time. For more severe symptoms, treatment with both medication and CBT is usually recommended.

OCD likely results from a complex combination of genetic predisposition/neurobiologic factors as well as life experiences and sociocultural factors.

Hope for People with OCD

OCD can be severely distressing and impairing. But there is hope for people with OCD! Recommended treatments help a majority of people get better.

For More Information About OCD

Please visit the website of the International OCD Foundation at https://iocdf.org/.

I've been evaluating and treating people with OCD for the past 30 years. If you'd like to see me for a one-time evaluation so I can give you treatment recommendations, or if you live in New York State and would like to see me for ongoing treatment, please call the Weill Cornell Psychiatry Specialty Center at 646-962-2820, email me at kap9161@med.cornell.edu (all lower case letters), or contact us.